Tomix was a human SoulWeaver whose domain was primarily in Ravenloss before heading to Pellow Village in Book 3.

He first appeared in Chapter 4 of Mogloween with that year's Halloween event serving as an introduction to him and his chain of quests, as well as helping in extracting the Darkness Orb from within Vayle.

His last Soul-Ally was Pandora, who resides in an artifact shaped like a cube attached on his coat. She was his soul-ally until he died along with Envy at the Void Core.

Tomix was born and raised in the village of Mortem, located at the western continent away from the Land of Dragons. He lived together with his mother Barvra, his elder brother Danyel, his twin brother Piotr, and his sister Katia.

Tomix was enrolled in Edelia, the School of Soulweaving. He made good friends with Izzac, and was noted to be a troublemaker. One day, he accepted a challenge from another student (later on revealed to be Khvorost) to weave a coat using the School's Headmaster's SpiritLooms which held within the Corrupt Seven Elemental Spirits. He used a forbidden incantation, which began to consume him, turning his face pale, his crimson hair white, his blue eyes orange and giving him multiple scars.

The spirits he tried to weave began to steal all of his life energy until "Aspar" intervened, saving Tomix's life. "Aspar" then joined Tomix and became his Soul-Ally and helped him hunt for the Corrupt Elemental Spirits he had released.

Over time, he had been able to find and destroy four of the seven spirits, leaving only Envy, Greed and Lust to be found. He chased Greed to Falconreach where Greed interfered with Mogloween by corrupting The Cauldron Sisters before escaping to Ravenloss with Tomix following behind.

Tomix then met up with the Hero in Ravenloss and explained how he believed that Greed had escaped through the Equilibrium Gate and asked for their assistance in searching for the keys to unlock the gate.

During the search for The Cloud Key in the Dusk Alley, the Hero and Tomix found Greedling, a minion of Greed who reveals that Greed is in Pellow Village, which lies beyond the Equilibrium Gate, searching for the Judgement Wheel, a powerful wish granting artifact to make him an immortal human, which is also what Envy and Lust were also searching for. Tomix declared that they must stop Greed from becoming an Immortal Human or else the entire world could fall into chaos. After finding The Cloud Key, the Hero and Tomix continued the search for the other seven keys.

With "Aspar" no longer his Soul-Ally Tomix could no longer weave, so he headed into the Elemental Spirit Plane where he found Pandora being harassed as other spirits, he then went and saved her and the two then became Soul-Allies. The one catch of her being his Soul-Ally is that when she is in the material world, her very existance causes misfortune and cataclysms. She told Tomix of an artifact, a cube that was used by her previous Soul-Ally, that can keep her in the material world with out causing danger to others, Tomix retrieved the artifact and she is now currently residing inside of it.

As the unknown amount of years between Books 2 and 3 passed, Tomix became decayed in appearance, and have a mature look. He and the hero now have to make a sail to the void using a void ship, so that he would defeat Aspar/Envy (his former spirit weave) inside the void. But the void ship is yet unmade and now, he will ask to his headmaster in Edelia about having more weavers to help in constructing one. But once he was now in the headmasters room, he was surprised about his older brother Danyel, became the new headmaster of Edelia. After a little brotherly conversation between the two. Danyel seems reluctant to the request of his younger brother, but later he promised the hero to lend men in constructing the void ship. And at the moment Tomix went to his house to check about how are his mother and his best friend doing. He later promised his sick friend that there is one more Corrupt Spirit to be defeated, and that is Envy.

After with the help of his brother Danyel, Captain Mazurek, player and much more, he finally manages to complete the Void Ship. When the ship reaches Ynnunngap, core of the Void where Envy hides, he finds out that Envy has locked the door by using two humans. The door can't be opened while humans are alive, so Mazurek and Yashta kill them. When Tomix reaches Aspar/Envy, it is revealed that since he was once rescued by Envy, he couldn't live with him banished. He keeps fighting Envy, and in the end he jumps off the pit. With Tomix dead, Envy can't keep living either so he dies too. There is also a quest which is about Tomix's funeral. However, after his death, his soulless twin brother awakens from his coma and visits his grave.

When the Hero decided to head to Edelia to ask help from Danyel, Kara tags along wanting to see the other continent. Upon meeting Danyel, the Hero got uncertain and decided to leave until the latter stopped him/her, knowing that he/she wasn't to blame for Tomix's death and decided to help him/her to make clothing for the upcoming ball.

The Hero barely managed to escape from the Magesterium with the help from Khvorost, a chaosweaver smuggler and met up with Mazurek to take them back to the Land of Dragons. Upon learning about his past and mentioned of giving a stupid dare to a student that got both of them expelled from the academy, the Hero and Mazurek then realized that he's the one whom gave this foolish challenge to Tomix, which indirectly resulted in the release of the 7 corrupted spirits and Tomix's death. After dealing with the elementals from the storm, Khvorost express regret of his past actions, wanting to know more about Tomix's fate.

Tomix can be used as a guest in the Ravenloss quests with his Level, HP and Mana scaled to The Player.

Tomix's attacks with melee and uses the Evil element. He also uses three abilities which take up high amounts of Mana :

Tomix using his regular attack on an Inferno Elemental. 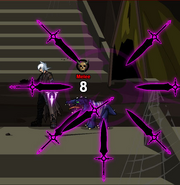 Tomix as seen in Book 3
Add a photo to this gallery
Retrieved from "https://dragonfable.fandom.com/wiki/Tomix?oldid=28706"
Community content is available under CC-BY-SA unless otherwise noted.