This Manual of Style outlines a standard of clean, consistent formatting for articles on this wiki. The formatting described here is a guideline and can be overridden where circumstances warrant it. These guidelines will never be unerringly perfect for every situation. However, please try your best to keep to the advice outlined in this article so others may use your edits as an example when creating and editing their own articles.

These guidelines are a summary of the most important guidelines for this wiki, but a more expansive set of style guidelines can be found on Wikipedia at Wikipedia Manual of Style.

One of the most important parts of wiki editing is how to structure an article. The structure is a powerful thing: it dictates what information the reader reads and when he or she reads it. It can influence what people contribute, where it goes, and how it might be written. Structure has the power to inform or confuse the same way good or bad writing does. Keep a well structured article, and you're more likely to have a high quality one.

Organize sections in an article in a hierarchical structure like you would an outline. Keep it logical, but feel free to forsake strict logic for readability. Wherever possible, try to have an introduction for each section. Just like the article as a whole, the section should start with an introduction and then have its subsections below it. Try using a shallow structure rather than a deep one. Too many nested sections usually leads to a confusing or unreadable article.

Above all, keep your layout consistent. Don't throw your reader a curve ball too often. The following sections will offer some good advice on keeping your articles clean, consistent, and clear.

The wiki has guidelines for how to lay out different types of articles. You can see these layouts in the Boilerplates and Templates pages.

When you have different versions of a subject that have the same title, Switch Infobox should be used. For example, if you need a page for the NPC Artix but their are also a guest Artix and a monster Artix, instead of cramming them on one page you would use Switch Infobox because it would look much more organized.

To use Switch infobox, you need to create a page of content for each tab you wish to display. For example first create the NPC page like normal but put the template at the top of the page. Place the infobox concerning the NPC in the template. Then do the same for the other infoboxes, for examples please refer to this documentation

In encyclopedic articles, the protagonist of DragonFable should be referred to as the "The Hero."

As the player characters can be either male or female, remember to write in a gender-neutral way. Where a pronoun must be used, the wiki uses "they" or "their", rather than "his/hers". However, in walkthrough articles and guides, second person (you) should be used.

The term "the player" should only be used to refer to the individual playing the game, not a character.

The lead should be capable of standing alone as a concise overview of the article, establishing context, and explaining why the subject is interesting or notable. It should be between one or two paragraphs long, and should be written in a clear and accessible style so that the reader is encouraged to read the rest of the article.

If possible, make the title the subject of the first sentence of the article. For example, write:

Artix is a great paladin and servant of the Light Lord.

The first time the article mentions the title, put it in bold using three apostrophes — '''article title''' produces article title. Avoid other uses of bold in the first sentence, except for alternative titles of an article; for example:

The father of Absolix Ryuusei Cartwright, known as Omega, was the one responsible for the death of Glenn Galrick.

Follow the normal rules for italics in choosing whether to put part or all of the title in italics. This will mainly apply to the titles of books and games:

Do not put links in the bold reiteration of the title in the article's lead sentence.

A table of contents will automatically appear in articles with a minimum of four headings (unless forced by the below options). By default this will be left-aligned above the first section heading.

The table of contents can be right-aligned - but only if it is very long (over 15 entries) and an information box is not occupying the top-right corner of the article (rare exceptions exist).

Be careful not to use single equal signs by mistake. That is a synonym of the <h1> heading markup, which is used automatically by the wiki's page header mechanism. Reusing it is bad style and risky coding.

Section headings are signposts to your article's structure. Make them short and simple to avoid confusion. Concision without obscurity in headings is good: for instance, you may usually drop a, an and the; omit unneeded pronouns; and so on.

This convention may differ from section heading rules that you have met elsewhere.

Images make an article memorable and pretty. They can speak where words fail. At the same time, misplaced or untidy images can detract from an article. When choosing images, keep in mind placement, size, and the appropriateness of the image to the section. Let images flow with the text instead of break it up.

Large images such as screenshots should use the "thumb" (example:[[File:CoolImage.png|thumb]]) option which displays large images as thumbnails. Images should generally be right aligned to enhance readability by allowing a smooth flow of text down the left margin - the "thumb" option does this by default. If an infobox is not being used in an article, a right aligned picture in the lead section is encouraged.

When an article has many images, or can be improved by having more, and having inline images be detract from the readability of an articles, the use of a <gallery> section is encouraged. 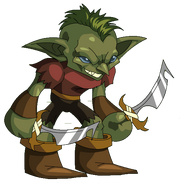 Caption
Add a photo to this gallery

You may tag an article if you believe it may need to be reviewed due to inaccuracies or poor writing. Articles will be categorized in one of the categories of Category:Site maintenance. For a complete list of available templates, see Category:Article management templates.

Tags within the text

Categories should be added to the end of an article—a full list can be found on Special:Categories. They take the form [[Category:Categoryname]].

All articles should be accessible starting from Category:Browse, via subcategories.

This type of quote is seen at the top of an article. It is only allowed within character pages. Place {{quote}} above the infobox.

Format a long quote (over four lines) as an italicized block quotation, which will be indented from both margins. Do not enclose the block quote in quotation marks. To format a block quotation, do not use the wiki indentation mark ":" — instead, use the HTML <blockquote> element.

Grammar is a writer's toolbox. You can't build good sentences without knowing how to use your tools. Since a wiki article must be as clear as possible for all the people reading it, editors must keep close to correct grammar standards to ensure clear communication.

Titles such as lord or king start with a capital letter when used as a title (followed by a name): "King Tralin", not "king Tralin". When used generically, they should be in lower case: "Tralin is a wise king." The correct formal name of an office is treated as a proper noun. Hence: "Tralin is the current King of Deren."

Classes should only be capitalized when used as a proper noun, i.e., as someone's name. ("Wizard, go be evil" versus "That wizard is quite evil.")

Races such as elf, moglin, human and dwarf should not be capitalized except when used as a proper noun or at the beginning of a sentence.

Italics are used for the titles of works, such as books and games. The titles of articles, chapters, and other short works are not italicized but are enclosed in double quotation marks.

For example, italicize AdventureQuest: The Dragon Secret, and use quotes if it is only a chapter that is mentioned.

As any work of fiction, the installments of the DragonFable series (regardless whether they are video games, novels, comic books, or any other supplemental material) take place in a "perpetual present tense" in the sense that their events unfold before the player/reader's eyes as if in the present (even though e.g. the novels are technically written in the past tense). With the narrated events thus continuously shifting from the future, through present, to the past as each story progresses, there is no single definitive "now" in the DragonFable series but the one that each individual player/reader is currently at. Since this wiki is written for the benefit of the players and readers of the DragonFable series, it should therefore ease their access to its contents by recounting the events of individual stories in the present tense. On the other hand, events that led up to them should be summed up in the past tense to clearly indicate that they took place outside of the time frame of the described installment.

Walkthrough articles should always use the present tense, because they are intended to be read in real time as the player progresses through a game. Occasionally, however, future tense may be used to warn the player of unforeseen consequences without spoiling the plot.

We now come to the meat of an article: the words themselves. When you're editing wikis, you're both academic and artist. You have to be accurate, but you also have to be interesting. Neither one can dominate; you have to skillfully balance both.

Keep your writing concise. Don't use two words where one will do. Keeping your writing simple will make it easy to understand and easy to expand on. Use complete sentences whenever possible. When you write, use grammar as a toolbox: know the rules, but only break them on purpose.

Check your spelling and grammar. Do not use 'u' in place of 'you' or '2' in place of 'to'. Write the way you would for a class paper or a newspaper article.

Keep all of the topics you cover within the scope of the article. What that means is, you don't need to give a detailed history of humans on the page about Winston Churchill. Consider the article's title as your point of origin and write from that perspective. Make use of the wiki's ability to link to more detailed articles or external sources for more information.

Write from an impersonal perspective. Do not use "I." For example, do not write, "Of all the threats from heck, few demons are as insidious and deceptively deadly as the darkness demon, as far as I know." Avoid drawing attention to the author (yourself) as much as possible.

Be bold. If you know something is wrong, correct it. If you think you could word something better, write it. If an article has a glaring deficiency, fill it. Even if your first attempt isn't golden, you can fix it later or someone else will come along and fix it for you. Don't be afraid to screw up.

Every article can be improved (even this one). Following these guidelines will not ensure a perfect article the first time, but it will give the article a stronger skeleton. It's ultimately your job as an editor to put meat on it.

Retrieved from "https://dragonfable.fandom.com/wiki/DragonFable_Wiki:Manual_of_Style?oldid=21199"
Community content is available under CC-BY-SA unless otherwise noted.